A small square appears in the center of the image area, and you can move it around with the cross keys.

Just like Quick mode, unfortunately, you have to press the AE-Lock button first until you hear the focus confirmation beep, then press the shutter button to fire. It's a little slower at times than phase-detect mode, but it gets the job done. Live mode is really better for tripod work, where you can place the AF area right where you want it and confirm focus onscreen. Both modes offer the ability to zoom in on your live view, excellent for confirming focus before capture.

Using the Magnify button just right of the AE-Lock button, you can zoom in 5x or 10x, then press the AE-Lock button to focus if you like; but of course you can't confirm framing in that mode. Another "digicam" benefit that comes thanks to Live View mode is Exposure Simulation, where the Canon EOS Rebel XSi EF-S 18-55IS Kit you see onscreen in non-flash shots will appear approximately how your final image will look.

If you're about to underexpose the image, for example, the Live View image will appear dark; or too bright if your settings will overexpose. It's great for fine-tuning in Manual mode. Exposure Simulation isn't always desirable, but it's something many digicam owners are spoiled by without even knowing it's unique. It's frustrating when they get so Canon EOS Rebel XSi EF-S 18-55IS Kit close to excellence, yet leave out something important. Though I think it's great that the main Quick mode includes an image of the nine autofocus points overlaid on the image, the chosen AF points don't light up red after you've pressed the AE-L button marked with an asterisk above the button to focus, making them almost useless. What it does show you if you see all nine AF points is that you are in Auto Select mode; and if you have selected an AF point, only that point shows. So it's not a total loss, but it would be a lot better if the Live View display behaved like the optical viewfinder.

My other beef is left over from the Canon 40D's Live View mode: I love that it has a histogram display option, but I can't understand why you'd make something that takes up almost one-quarter of the screen completely opaque. Other companies have managed translucent histograms for years, Canon needs to get this coded up and loaded up, and quick. I wouldn't have believed it was as big a difference if I didn't see it. More of an aesthetic issue is a slight improvement to the Canon XSi's rear Status display, with improved graphics and four color palates to choose from. Canon improved the lens characteristics dramatically.

Canon claims you can shoot at up to four stops slower than normal and still get a stable shot. If you're a fairly steady shooter, it seems to be true. Your Canon EOS Rebel XSi EF-S 18-55IS Kit may vary, and remember that image stabilization compensates for camera movement, not for subject movement, so tell them to hold very still or shoot with a faster shutter speed at a higher ISO. One unusual aspect to the new EF-S mm lens is its tendency to ring audibly while the image stabilization motor is running.

My old EF mm IS lens makes some noise while it's operating, but not like this high-pitched whine. I'd still buy one of these lenses for myself, but if you're sensitive to high pitched sounds, the ringing might cut through your head after awhile.

With the XTi, you always have to scroll to the top of the list and highlight the tab to move to the next tab, but it's easier with the XSi: Your previous menu selection is retained when you return to that tab, another benefit when changing the same setting often. Though certain functions are buried in sub-menus, like the Flash Exposure Compensation mentioned belowthere's a new MyMenu tab which you can program with six of your most-used menu items for quick access. Canon Rebel XSi Flash There's not much new about the flash performance, but a few items have changed, including the Canon EOS Rebel XSi EF-S 18-55IS Kit hook and retention rails in the pop-up flash, which are now plastic instead of metal.

Adjusting the flash exposure compensation isn't as easy as before, however. Whereas you used to find it just below AE bracketing on the second Record menu, now it's buried on the second Settings menu, at the bottom of the list, under Flash Control. Then you have to scroll to the Built-in flash func. That's four steps where you used to Canon EOS Rebel XSi EF-S 18-55IS Kit only two to adjust flash exposure compensation. Otherwise, the built-in flash performs well, capable of good exposures out to 16 feet at wide angle. Its lightweight portability means that you can take it wherever you go.

For those of you that travel a lot or just like to be prepared, this Canon Rebel XSi camera will be your ally. Despite this relatively small size, the EOS D packs quite a view-finding punch. This innovative tool also doubles as a status display tool. 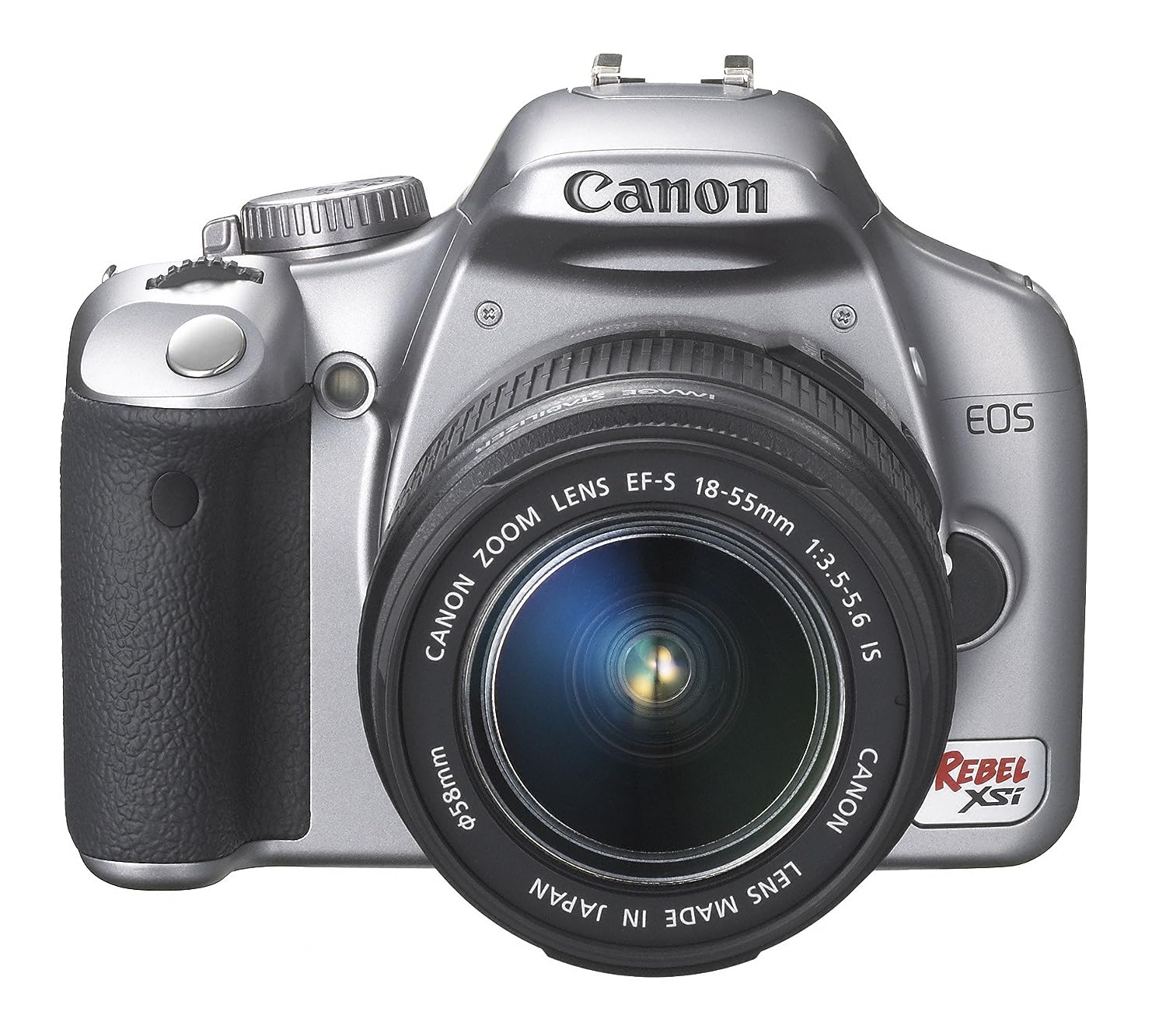 It allows you to monitor vitals like battery life, exposure type, remaining shots, and much more. With this thoughtful addition, your days of wasting time with complicated controls are over.